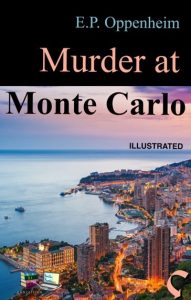 From the Mystery Library, this book relates the adventures of a man who doesn’t agree with the police’s reports. The murderer has confessed, consequently, the mystery is solved. He decided to find by himself the real murder.View what happened!

Roger followed the man along that dreary carpeted way which he was beginning to loathe, mounted in the lift by the side of which Luke Cheyne had been murdered, crossed the lounge of the Hôtel de Paris, left by the swing doors and went up the steps into the Casino.

Here his guide led him by a devious way to an underground floor and paused before a door guarded by a gendarme. They were allowed to pass in, however, and found Thornton engaged with one of the Monaco officials, a solemn-visaged doctor, and an undertaker. Upon a mattress, raised a little from the floor and covered over with a sheet, was the victim of the tragedy.

Thornton disengaged himself from the others and came over at once to Roger. It was obvious that he had received a shock, for his eyes seemed to have receded farther into his head than ever. He was very pale and had lost something of his cold equanimity of manner.

“Sloane,” he exclaimed, “this is damnable!”

“I have only just heard about it,” Roger groaned.

“We have been looking everywhere for you. Where the mischief has you been?”

“I dined at Cannes last night and came back late,” he explained. “This morning I launched with my aunt. Afterward, I went over to Nice and I only got back a quarter of an hour ago.”

“We must have just missed you everywhere. I thought you might have been able to do something with Erskine. I don’t know why, but we all had nerves.

They only asked him for a hundred and eighty thousand of his winnings. I wanted him to pay and Prince Savonarilda offered to go halves. I’m afraid that rather set his back up, though.”

“In my pocket. We can’t do any good here. Come outside somewhere and I’ll show it to you.”

Roger paused for a moment, looking out of the window with his back to the room, its ghostly occupant and the little group of whispering officials. Outside were the crowds at the Café de Paris. The music was dimly audible, although the windows were closely fastened.

There was something pitiless and ghastly about the gay antics of the conductor in his brilliant uniform. Roger turned back into the room and moved reverently towards the improvised bed.

“Where are you going?” Thornton asked.

“A morbid idea,” Roger confessed. “I just wanted to have a look at him. Poor old Pips.”

Thornton gripped the other by the arm.

“They won’t let you,” he warned him. “I wanted to have a last look myself. I was here when they brought him in.”

“That’s absurd,” Roger scoffed. “He was a great friend of mine.”

He moved another step towards the couch. The doctor of the Casino and a functionary with whom he had been talking blocked the way.

“The murdered man was a friend of mine,” Roger explained, speaking almost under his breath. “I know all his people. I want to have just one look at him.”

They both shook their heads.

“It is against the rules,” the doctor regretted. “There will be another opportunity. We are waiting now for the coffin.”

“What better opportunity could there be?” Roger protested. “Monsieur does not understand, perhaps,” he added, turning to the official. “Lord Erskine was an intimate friend of mine, not an ordinary acquaintance. We were at school and college together. I know some of his people. I shall be compelled to report this terrible circumstance to them. At least, they will wish to know that I paid my last respects…”

“After the coffin has arrived, if you please,” the functionary pleaded. “You are the only stranger who is permitted inside this room. It is not for the public — even for the friends of the unfortunates who are brought here.”

“Major Thornton has special privileges. He has been attached to your Foreign Office and he is a member of your English police,” the functionary reminded him. “We must ask you now, please, to leave.”

“I think you had better come along,” Thornton advised.

Roger was a little bewildered but he gave in. A man in livery let them out by a private door. They walked across the Place into the bar of the Hôtel de Paris and found two easy-chairs in a quiet corner. Neither of them thought of ordering drinks.

“Why the mischief wouldn’t they let me have one last look at poor Pips?” Roger demanded.

“I can’t tell, Sloane,” Thornton replied. “This place is festering with rules and regulations. One is hemmed in on every side. I suppose that’s why these things occur.”

“Tell me more about it,” Roger begged. “Did Erskine have a big win?”

“Yes, he did — a big win for him. He won about two hundred and thirty thousand early yesterday evening. Naturally, he had one or two drinks and was chatty about it. It happened to be a very quiet evening over here and most of our lot, as you know, were over at Cannes and there were scarcely a dozen people in the bar when Erskine began to pull out his twenty thousand franc jetons.

He went home, as I happen to know, quite early, because I invited him up to the Carlton and he said that he had a head. When he woke up this morning, the letter was with his newspapers and the rest of his correspondence.”

“Have the police got it?” Roger asked.