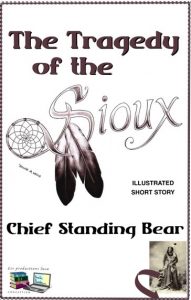 The Tragedy of the Sioux

After the death of Crazy Horse in 1877 abrupt changes came for the Sioux of this tribe.

The Sioux were succumbing to the trickery of the whites and the undermining of their own tribal morale.

Perhaps their thanks for their unsweving loyalty and patriotism during World War of 1917-1918, they suffered from cold and insufficient food in their new reserve.

In 1879 I was sent, with some eighty other boys and girls, to Carlisle Indian School in Pennsylvania, to be made over into the likeness of the conqueror. I went dressed in the traditional apparel of the Plains tribes — moccasins, breechclout, leggins and blanket.

My hair was long. I left my people trying to settle down and put the ancestral life back of them — the older with resignation or with bitter, resentful memories; the young with wonderment and bewilderment.

When, some three or four years later, I returned, things were different. I heard the old men talking about the last buffalo hunt and everyone was learning to eat “spotted buffalo.”

Instead of the council of chiefs to guide us the White Grandfather (in Washington) sent his emissaries. Then came the agent and the white soldiers. The white soldier has always stayed close to us. He is there today.

But it was upon the Indian police, perhaps, that we looked with most disdain. With them was injected into our lives the idea of physical force — something not known in our intertribal life.

The Indian police compelled a conduct contrary to all our ancestral notions of lawful and manly action. In organized Sioux society there was no punishment — no jailing, no whipping, no denying of food, no taking away of personal liberty.

But there was a very effective system of ostracization: the wrongdoer was ignored — and Sioux society was peculiarly free from crime. A few weeks ago, as I left the reservation for my return to the city, one of my relatives expressed his concern for my safety on the journey, and especially after I reached the city.

He asked me if I had a weapon and I said no. He thought that I should be prepared to protect myself against the robbers and thieves that infest the city!

Always, in the tribal days, the young deferred to the old, and were so trained from babyhood. It was the old who held the wisdom o£ the tribe — they were the teachers and instructors.

But under the agency system, often-times the policeman was a young fellow who was sent out, by order of the agent, to handcuff and bring in an old man. This happened in the instance of one of my brothers. I felt dishonored and asked him to quit the force, which he did.

There was still another influence that came, almost as soon as the agency buildings were established, and took a place in routing the old life — the church.

These things were very foreign, very upsetting, to minds and bodies that had, out of centuries of struggle, achieved a harmony with their surroundings. The Indian fitted the broad plains and loved them just as did the buffalo. And those great grassy spaces, even today, are fit only for the raising of the four-footed beast.

The country at large little knew what these sudden changes meant to my people — both as individuals and as a nation. It simply felt safe in the thought that a “warlike” race had been quelled and quieted. That it had been led into ways of peace and progress. That the “savages” were being kindly treated and their well-being carefully considered by a beneficent government.

There is not and never has been a human attitude taken toward the Indian. No acknowledgment of his virtues. No friendly acceptance of his native abilities. He has been made to feel his segregation.

Since the Indian wars ended the white man has so busied himself wresting riches from the land that its people have been forgotten. Forgotten save for a few friends and humanitarians whose sensitive souls are uneasy and irritated as long as the voices of the oppressed are audible.