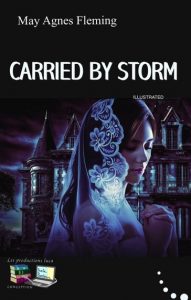 May Agnes Fleming was a Canadian novelist. She was “one of the first Canadians to pursue a highly successful career as a writer of popular fiction”. She began writing at the age of thirteen.
May Agnes Early was born in Carleton, West Saint John, in the Colony of New Brunswick to Irish immigrant. She married an engineer, John W. Fleming, in 1865. She moved to New York two years after her first novel, Erminie; or The gypsy’s vow: a tale of love and vengeance was published there (1863).

Carried by Storm has been selected by scholars as being culturally important, and is part of the knowledge base of civilization as we know it.
An extract:
“Do not laugh,” says Miss Ventnor, austerely; “there is nothing to laugh at. A dark and direful tragedy was enacted within the walls of that gloomy red farm-house — let me see — four — yes, nearly five years ago. Do you see that third window to the right, in the attic story? Well, a man was murdered — stabbed to death in that room.”

Discover this story and these interesting people.

WHICH IS HIGHLY SENSATIONAL

Look at it well,” says Miss Ventnor, “it is what you have never seen before — what you may never see again — a Haunted House!

One slim, gloved hand, looking like a perfect hand in dark gray marble, points the dramatic speech. Miss Ventnor is given to dramatic and epigrammatic little speeches at all times, but as she is not given to talking nonsense at any time, I know there is “method in the madness” of this assertion now. And yet — a haunted house! I laugh a little, as I lean out from the carriage to look.

“Do not laugh,” says Miss Ventnor, austerely; “there is nothing to laugh at. A dark and direful tragedy was enacted within the walls of that gloomy red farm-house — let me see — four — yes, nearly five years ago. Do you see that third window to the right, in the attic story? Well, a man was murdered — stabbed to death in that room.”

“Ugh! how horrid!” I say, with a shudder. If she had told me he had drowned himself, or poisoned himself, or charcoaled himself, à la Française, or even hanged himself, or gone out of time into eternity by any one of those other violent but unbloody gates, her tragedy would have lost its most grisly element. But the average female mind shrinks in repulsion from the thought of a severed jugular or a pool of blood.

“And ever since the house has been haunted, of course,” says Miss Ventnor, folding one gray kid calmly over the other. “It is a good house and a fine farm, and since Sleaford’s time — Sleaford was the victim — the rent has been merely nominal.

All in vain. Sleaford ‘walks,’ and in the ‘dead waste and middle of the night’ the struggle is re-enacted, and panic-stricken, belated wayfarers fly. It is all nonsense, of course,” says Miss Ventnor, changing suddenly from a Siddons’ voice to a practical, every-day one.

“Sleaford, poor wretch, lies over yonder in Potter’s Field and troubles nobody. But the fact remains that people will not live in the place, and the most audacious tramp and thief will give the peach trees and melon patches of Sleaford’s a wide berth, be he never so hungry.

And — I do not mind admitting that even I would go half a dozen miles roundabout rather than pass it alone after nightfall. So take a good look at it, my dear, a bona fide haunted house is a sight to be respected and remembered, if only for its rarity in this degenerate age. And this evening, after dinner, I will tell you all about it.”

I do not need the injunction — I am taking a good look at Sleaford’s! Even without Miss Ventnor’s ghastly legend the place could hardly fail to impress one in a weird and dismal way. But just now the mise en scene is in keeping with the story.

Drawing Mixed Reality Illusion     And you can check our Art & Crafts Collection here: https://ecolo-luca.com/collections/art-crafts   All of our books All of our videos Home Thanks for your visit!