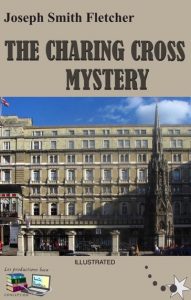 Charing Cross is a junction in London, England, where six routes meet.
A retired police inspector on vacation dies suddenly on a train, it sets in motion a whole tangle of intrigue and mystery.
If you like mystery and suspense, you will love this classic story.

“There never was a more popular man than he was, with everybody!” she exclaimed. “Who should want to take his life?”

“That’s just what we’ve got to find out, ma’am,” said Mather. “And I want to know as much as I can, I dare say Miss Hannaford can tell me a lot. Now, let’s see what we do know from what you told me this morning.

Mr. Hannaford had been Superintendent of Police at Sellithwaite for some years. He had recently retired on his pension. He proposed to live in London, and you and he, Miss Hannaford, came to London to look for a suitable house, arrived three days ago, and put up at this hotel.

That’s all correct? Very good, now then, let me hear all about his movements during the last three days. What did he do? Where did he spend his time?”

“I can’t tell you much,” answered Rhona. “He was out most of the day, and generally by himself. I was only out with him twice, once when we went to do some shopping, another time when we called on Mr. Kenth at his rooms in the Temple. I understood he was looking for a house, seeing house agents and so on. He was out morning, afternoon and evening.”

“Did he never tell you anything about where he’d been, or whom he’d seen?”

“No. He was the sort of man who keeps things to himself. I have no idea where he went nor whom he saw.”

“Didn’t say anything about where he was going last night?”

“No. He only said that he was going out and that I should find him here when I got back from the theatre, to which I was going with Mrs. Keeley. We got back here soon after eleven. But he hadn’t come in, as you know.”

“You never heard him speak of having enemies?”

“I should think he hadn’t an enemy in the world! He was a very kind man and very popular, even with the people he had to deal with as a police-superintendent.”

“And I suppose he’d no financial worries, anything of that sort? Nor any other troubles, nothing to bother him?”

“I don’t think he’d care in the world,” said Rhona confidently. “He was looking forward with real zest to settling down in London. And as to financial worries, he’d none. He was well off.”

Mather glanced at Hether, who had listened carefully to all that was asked and answered. Something in the glance seemed to invite him to take a hand.