The Tale of the Black Forest 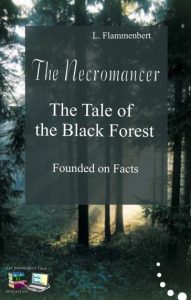 The Necromancer consists of a series of interconnected stories, all centering on the enigmatic figure of Volkert the Necromancer. Filled with murder, ghosts, and dark magic, and featuring a delirious and dizzying plot that almost defies comprehension, The Necromancer is one of the strangest horror novels ever written.

One of the earliest Gothic bestsellers, The Necromancer was first published in 1794, and after more than two centuries still retains the power to thrill and fascinate readers. This edition includes a new preface which reveals for the first time ever the true identity of The Necromancer’s author. The complete text of three contemporary reviews and helpful annotations are also included to further enhance this edition. This edition contains the unabridged text of the 1794 edition and is specially formatted for optimal viewing on the Kindle.

An extract:
…
He began to think that he was doomed to be a villain, and being driven to despair by hard labour and frequent blows, he concerted plans of effecting his escape.

One of his fellow-prisoners, a most consummate ruffian, joined with him in devising means of regaining their liberty; and after many fruitless efforts, they at length affected their escape, assisted by an impenetrable fog which covered their flight.

As soon as their escape was known in the fortress, the cannons were fired and the country roused. However, they happily eluded their pursuers, and reached, at the close of the day, a wood, where they resolved to conceal themselves in the tops of the trees till the heat of the pursuit should have abated.

In this uncomfortable situation, they remained as long as their small stock of provisions lasted, consulting with each other by what means they could best procure an independent livelihood, and at last agreed to resort to the Haunted Castle in the Black Forest, and there to commence robbery. After many fatiguing rambles and alarming fears, they arrived at length at the wished-for asylum.

Wolfe’s inventive genius begot the scheme to render that desolate fabric more secure against the intrusion of unwelcome visitors, by raising an idea in the fancy of the neighbouring villagers of its being haunted by evil spirits. In order to accomplish their design, they set up a dreadful howling and doleful lamentations whenever they perceived some of the villagers near the environs of the castle.

The gloomy appearance of that half-decayed fabric, aided by the superstition of the credulous peasantry, rendered their artful schemes successful, and in a short time none of the villagers dared to approach their lurking-place, from which they sallied out every night, disguised in the skin of goats, which they had stolen and fleeced, and committed numberless robberies in the village.

Having procured a sufficient stock of money, Wolfe’s associate was dispatched to a neighbouring town to procure fire-arms, powder, and ball, and then they began to prey on the unwary wanderer. To relate the numberless robberies they committed before they were joined by new associates would swell volumes.

As their numbers augmented they became more daring, and extended their depredations many miles over the country, till after a series of thirty successful years their infernal society sustained a deadly blow by the nocturnal surprise which delivered them into the power of punishing justice.
…

The eBooks
The Videos