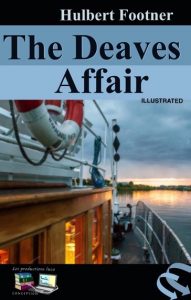 A millionnaire family is attacked by a blackmailer.
They will be ruined if he always succeeds.
Evan is engaged to protect the old man from the crowd and from their blunders.
But he had to play the role of a detective to help this family to discover the mystery in this affair.
Will he succeed? Discover what happen!

SUSPICIOUS OF HIS BODY-GUARD

Evan spent the afternoon walking about with Simeon Deaves. The old man was an indefatigable pedestrian. He had no object in his wanderings, but loved to poke into the oddest and most out-of-the-way corners of the town.

They were not followed today so far as Evan could tell. At first Simeon Deaves was uneasy and suspicious of his body-guard, but finding that Evan took everything calmly for granted, he unbent and became loquacious. All his talk was on the same subject: how to get along in the world, i.e. how to make money.

Evan having taken him home at last, sank into the seat of a bus with relief. “Anyhow it will be good for my health,” he thought.

Before going home he called at the studio of a friend, a member of the Barbizon Club, and without taking him entirely into his confidence, enlisted his aid in investigating the actions and habits of the men on Hassell’s list. It may be said here, that nothing came of this.

Evan and Charley met for the evening meal. The irrepressible Charley was still singing about the red-haired girl. In spite of his boasts it appeared that his advances had consistently been turned down. Evan took a little comfort from this. Sullenness was unknown to the gay Charley and he was not a whit less optimistic because of his set-backs.

“You don’t want a girl to be too come-on-ish,” he said. “A highty-tighty manner adds zest to the game. They don’t expect to be taken seriously when they turn you down, bless your heart, no. Why, if I let that girl drop now, she’d despise me for my faintheartedness. Sure, and be as disappointed as anything!”

Evan was not in much of a humour to laugh at him. Indeed he foresaw that an impossible situation would presently develop between Charley and him unless he said something. With an elaborately casual manner he began at last:

“I say, Charl, you and I have always played fair with each other.”

“Well I should rather fancy, as Lord Percy said. What’s on your chest, boy? Unload! Unload!”

“It’s only fair to tell you that I have become acquainted with the young lady in question.”

Charley stared. “The Deuce you say! You, the scorner of the sex! Since when?”

“And you never said a word about it. You let me shoot off my mouth all this time and never… ”

“What was there to say?”

“That was for your own good!”

“Come off! Come off! Have I such a trusting eye? On the level why didn’t you tell me before?”

What was Evan to say. He began an explanation that was no explanation. Charley’s sharp eyes bored him through and through.

“By the Lord!” cried the latter at last, “Old Stony-heart has melted! St. Anthony has fallen for the caloric tresses. Touched where he lives, by Gad! Brought low and humbled in the dust!”

Evan grinned painfully. “Don’t be a fool!” he muttered.

“How does it feel?” asked Charley with mock solicitude, “a dull ache in the epigastrium or a fluttering sensation in the pericardium; some lay stress on the characteristic feeling of heaviness behind the occiput.”

“You wheeze like a vaudeville performer on small time,” growled Evan.

Charley roared. He did not often get his partner on the grill like this. It was generally the other way about. But in the midst of his outrageous joshing it suddenly struck the warm-hearted Charley that under his game grin Evan was suffering very pretty torments.

And, you’re always welcome at https://ecolo-luca.com

The Deaves Affair   A millionnaire family is attacked by a blackmailer. They will be ruined if he always succeeds. Evan is engaged to protect the old man from the crowd and from their blunders. But he had to play the role of a detective to help this family to… Read more“The Deaves Affair”