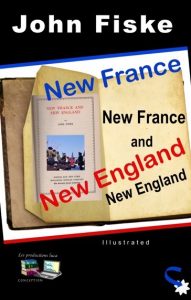 From The historical writings by John Fiske, in twelve volumes, here is the Volume IX, New France and New England, divided into 10 chapters:
1- From Cartier to Champlain
2- The Beginnings of Quebec
3- Lords of Acadia
4- Wilderness and Empire
5- Witchcraft of Salem
6- The Great Awakening
7- Norridgewock and Louisburg
8- Beginnings of the Great War
9- Crown Point, Fort William Henry, and Ticonderoga
10- Louisburg, Fort Duquesne, and the Fall of Quebec
You will learn a lot of information about different periods of history. You will like it, for sure!
Mr John Fiske was a great historian. Here is a serie that you could appreciate.

On Amazon or Kobo

With a forty-ton pinnace and two boats carrying fifty men Cartier kept on up the river, leaving his ships well guarded in a snug harbour within the mouth of the stream now known as the St. Charles. A cheerful voyage of a fortnight brought the little party to Hochelaga, where they landed on a crisp October morning.

There came forth to meet them – in the magniloquent phrase of the old narrator – “one of the principal lords of the said city”, with a large company of retainers, for thus did their European eyes interpret the group of clan members by whom they were welcomed.

A huge bonfire was soon blazing and crackling, and Indian tongues, loosened by its genial warmth, poured forth floods of eloquence, until presently the whole company took up its march into the great city of Hochelaga.

A sketch of this rustic stronghold was published in 1556 in Ramusio’s collection of voyages. The name of the draughtsman has not come down to us, but it was apparently drawn from memory by someone of Cartier’s party, for while it does not answer in all details to Cartier’s description, it is a most characteristic and unmistakable Iroquois town. It was circular in shape. The central portion consisted of about fifty long wigwams, about 150 feet in length by 50 in breadth, framed of saplings tightly boarded in with sheets of bark.

Through the middle of each wigwam ran a passageway, with stone fireplaces at intervals coming under openings in the high bark roof whereby some of the smoke might escape. Kettles of baked clay hung over most of the fires, and the smoky atmosphere was redolent of simmering messes of corn and beans and fowl, or, if it were a gala day, of boiled dog, while the fumes of tobacco were omnipresent.

On either side were the rows of shelves or benches covered with furs, which served as beds; while here and there, overlooking sheaves of stone arrows and scattered tomahawks, there dangled flint knives and red clay pipes and dried human scalps. These spacious wigwams were arranged about a large central square, and outside of them a considerable interval or boulevard intervened between habitations and wall.

Such a town might have held a population of from 2500 to 3000 souls, but the actual number was apt to fall short of the capacity. The town wall was ingeniously constructed of three concentric rows of stout saplings. The middle row stood erect in the ground, rising to a height of twelve or fifteen feet; and the two outer rows, planted at a distance of five or six feet on either side of it, were inclined so as to make a two-sided tent-shaped structure.

The three rows of saplings met at the top, and were tightly lashed to a horizontal ridge-pole, while at the bottom, and again about halfway up, they were connected by diagonal cross-braces, after the herringbone pattern, thus securing great strength and stability.

Around the inside of this stout wall, and near the top, ran a gallery accessible by short ladders, and upon the gallery, our explorers observed piles of stones ready to be hurled at an approaching foe. Outside in all directions stretched rugged half-cleared fields clad in the brown remnant of last summer’s corn crop, and dotted here and there with yellow pumpkins.

The arrival of the white strangers was the cause of wild excitement among the bark cabins and in the open square of Hochelaga. Their demeanour was so courteous and friendly that men, women, and children allowed curiosity to prevail over fear; they flocked about the Frenchmen and felt of their steel weapons and stroked their beards.

Sick Indians came up to be touched and cured, trinkets were handed about, politic speeches were made, and at length amid a loud fanfare of trumpets the white men took their leave.

Before they embarked the Indians escorted them to the summit of the neighbouring hill, which Cartier named Mont Royal, a name which as Montreal still remains attached to the hill and to the noble city at its foot.

On Amazon or Kobo