The life of English Women in India. 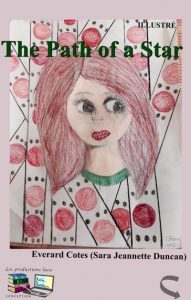 There was a panic in Dhurrumtolla; a “ticca-gharry” — the shabby oblong box on wheels, dignified in municipal regulations as a hackney carriage — was running away.

Coolie mothers dragged naked children up on the pavement with angry screams. Drivers of ox-carts dug their lean beasts in the side, and turned out of the way almost at a trot; only the tram-car held on its course in conscious invincibility.

A pariah tore along beside the vehicle barking. Crows flew up from the rubbish heaps in the road by half-dozens, protesting shrilly. A pedlar of blue bead necklaces just escaped being knocked down.

Little groups of native clerks and money-lenders stood looking after, laughing and speculating. A native policeman, staring also, gave them sharp orders to disperse, and they said to him:

To each other they said:

“Behold, the driver is a ‘mut-wallah’ (or drunken person). And presently, as the thing whirled farther up the emptied perspective:

The driver was certainly very drunk. His whip circled perpetually above his head. The syce clinging behind was stiff with terror, and fell off like a bundle of rags. Inside, Hilda Howe, with a hand in the strap at each side and her feet against the opposite seat, swayed violently and waited for what might happen, breathing short.

Whenever the gharry thrashed over the tram-lines, she closed her eyes. There was a point near Cornwallis Street where she saw the off front wheel make sickeningly queer revolutions. And another, electrically close, when two tossing roan heads with pink noses appeared in a gate to the left, heading smartly out, all unawares, at precisely right angles to her own derelict equipage.

That was the juncture of the Reverend Stephen Arnold’s interference, walking and discussing with Amiruddin Khan, as he was, the comparative benefits of Catholic and Mohammedan fasting. It would be easy to magnify what Stephen did in that interruption of the considerate hearing he was giving to Amiruddin.

The ticca-gharry ponies were almost spent, and any resolute hand could have impelled them away from the carriage-pole with which the roans threatened to impale their wretched sides. The front wheel, however, made him heroic, going off at a tangent into a cloth merchant’s shop, and precipitating a crash while he still clung to the reins.

The door flew open on the under side, and Hilda fell through, grasping at the dust of the road. While the driver, discovering that his seat was no longer horizontal, entered suddenly upon sobriety, and clamoured with tears that the cloth-merchant should restore his wheel — was he not a poor man?

Hilda, struggling with her hat-pins, felt her dress brushed by various lean hands of the bazar, and observed herself the central figure in yet another situation. When she was in a condition to see, she saw Arnold soothing the ponies. Amiruddin, before the vague possibility of police complication having slipped away. Stephen had believed the gharry empty. The sight of her, in her disordered draperies, was a revelation and a reproach.

“Is it possible!” he exclaimed, and was beside her. “You are not hurt?”

“Only scraped, thanks. I am lucky to get off with this.”

She held up her right palm, broadly abraded around the base, where her hand had struck the road. Arnold took it delicately in his own thin fingers to examine it. An infinity of contrast rested in the touch. He looked at it with anxiety so obviously deep and troubled, that Hilda silently smiled. She who had been battered, as she said, twice round the world, found it disproportionate.

“It’s the merest scratch,” she said, grave again to meet his glance.

The priest made a solicitous bandage with his handkerchief, while the circle about them solidified.

“It is quite unpleasantly deep. You must let me take you at once to the nearest chemist’s and get it properly washed and dressed, or it may give you a vast amount of trouble — but I am walking.”

“I will walk too,” Hilda said readily. “I should prefer it, truly.”

With her undamaged hand she produced a rupee from her pocket, where a few coins chinked casually, looked at it, and groped for another.

“I really can’t afford any more,” she said. “He can get his wheel mended with that, can’t he?”

“It is three times his fare,” Arnold said austerely, “and he deserved nothing — but a fine, perhaps.”

The man was suppliant before them, cringing, salaaming, holding joined palms open. Hilda lifted her head and looked over the shoulders of the little rabble, where the sun stood golden upon the roadside and two naked children played with a torn pink kite. Something seemed to gather into her eyes as she looked, and when she fixed them softly upon Arnold, to speak, as it had spoken before.

ORCHIDS TO MURDER (Illustrated) by Hulbert Footner   A young woman disappeared the day that she was supposed to marry her love. Where is she? What happened? Lee, one of her friend, is a detective and will search for all this entangled affair. Bad news and great mystery are waiting… Read more“ORCHIDS TO MURDER”