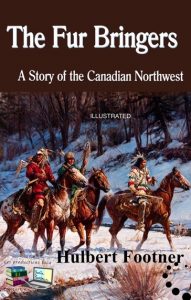 A Story of the Canadian Northwest

A pioneer, a fur bringer, falls in love whith a girl that he never met.
Will she want him? And his father?
Accused by liars, then prisoner of the Indians. Why and how will he escape from them?
Which of these guys are his friend?
Follow this adventure that you will like!

“I suppose Miss Colina has plenty of suitors?” said Peter.

Ambrose hung with suspended breath on the reply.

Poly shook his curly pate. “Who is there for her?” he demanded. “Macfarlane the policeman is too fat; the doctor is too old, his hair is white; the parson is a little, scary man. All are afraid of her; her proud eye mak’ a man feel weak inside. There are no ot’er white men there. She is a woman. She mus’ have a master. There is no man in the country strong enough for that!”

There was a brief silence in the cabin while Poly relighted his cigar. Ambrose had given no sign of being affected by Poly’s tale beyond a slight quivering of the nostrils. But Peter watching him slyly, saw him raise his lids for a moment and saw his dark eyes glowing like coals in a pit. Peter chuckled inwardly, and said:

“Tell us some more about her.”

Ambrose’s heart warmed gratefully toward his partner. He thirsted for more like a desert traveler for water, but he dared not speak for fear of what he might betray.

“I will tell you ‘ow she save Michel Trudeau’s life,” said Poly, nothing loath, “I am the first to come down the river this summer or you would hear it before. Many times Michel is tell me this story. Never I heard such a story before. A woman to save a man!

“Wa! Every Saturday night Michel tell it at the store. And John Gaviller give him two dollars of tobacco, the best. I guess Michel is glad the trader’s daughter save him. Old man proud, lak he is save Michel himself!”

Poly Goussard, having smoked the cigar to within half an inch of his lips, regretfully threw the half inch out the door. He paused, and coughed suggestively. A second cigar being forthcoming, he took the time to light it with tenderest care. Meanwhile, Ambrose kicked the bale on which he sat with an impatient heel.

“It was the Tuesday after Easter,” Poly finally began. “It was when the men went out to visit their traps again after big time at the fort. There was moch frash snow fall, and heavy going for the dogs. Colina Gaviller she moch friends with Michel Trudeau for because he was bring her in on his raf las’ fall.

“Often she go with him lak she go with me. Michel carry her up on his sledge, and she hunt aroun’ while he visit his traps. Michel trap up on the bench three mile from the fort. He not get much fur so near, but live home in a warm house, and work for day’s wages for John Gaviller.”

Poly paragraphed his story with luxurious puffs at the cigar and careful attention to keep it burning evenly.

“So on Tuesday after Easter they go out toget’er. Colina Gaviller ride on the sledge and Michel he break trail ahead. Come to the bench, leave the dogs in a shelter Michel build in a poplar bluff. Michel go to see his traps, and Colina walk away on her snowshoes wit’ her little gun.

“Come to fourth trap, wa! see somesing black on the snow! Wa! Wa! Him heart jomp up! Think him got black fox sure! But no! It is too big. Come close and look. What is he catch you think? It is a black bear!

“Everybody know some tam a bear wake up too soon in winter and come out of his hole and roll aroun’ lak he was drunk. He can’t find somesing to eat nowhere, and don’ know what to do!

“This bear him catch his paw in Michel’s little fox trap. It was chain to a little tree. Bear too weak to pull his paw out or break the chain. He lie down lak dead.

Our eBooks
Our videos