Episodes in the Life of the Illustrious Colonel Clay 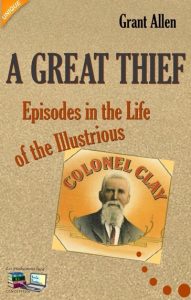 His name is Colonel Clay or Monsieur Caoutchouc because he can transform himself in many different personages. A master of disguise. How he can make it?

The millionnaire Sir Charles VanDrift had to recognize and catch him before this guy take all his fortune. Will he find him? Is it too late?

Through Africa, Europe, and America, it is not easy to discover the truth. Follow these episodes in the life of the illustrious Colonel Clay, you will like this.

The twelfth of August saw us, as usual, at Seldon Castle, Ross-shire. It is part of Charles’s restless, roving temperament that, on the morning of the eleventh, wet or fine, he must set out from London, whether the House is sitting or not, in defiance of the most urgent three-line whips. And at dawn on the twelfth he must be at work on his moors, shooting down the young birds with might and main, at the earliest possible legal moment.

He goes on like Saul, slaying his thousands, or, like David, his tens of thousands, with all the guns in the house to help him, till the keepers warn him he has killed as many grouse as they consider desirable.

And then, having done his duty, as he thinks, in this respect, he retires precipitately with flying colours to Brighton, Nice, Monte Carlo, or elsewhere. He must be always “on the trek”; when he is buried, I believe he will not be able to rest quiet in his grave: his ghost will walk the world to terrify old ladies.

“At Seldon, at least,” he said to me, with a sigh, as he stepped into his Pullman, “I shall be safe from that impostor!”

And indeed, as soon as he had begun to tire a little of counting up his hundreds of brace per diem, he found a trifling piece of financial work cut ready to his hand, which amply distracted his mind for the moment from Colonel Clay, his accomplices, and his villainies.

Sir Charles, I ought to say, had secured during that summer a very advantageous option in a part of Africa on the Transvaal frontier, rumoured to be auriferous. Now, whether it was auriferous or not before, the mere fact that Charles had secured some claim on it naturally made it so. For no man had ever the genuine Midas-touch to a greater degree than Charles Vandrift.

Whatever he handles turns at once to gold, if not to diamonds. Therefore, as soon as my brother-in-law had obtained this option from the native vendor (a most respected chief, by name Montsioa), and promoted a company of his own to develop it, his great rival in that region, Lord Craig-Ellachie (formerly Sir David Alexander Granton), immediately secured a similar option of an adjacent track, the larger part of which had pretty much the same geological conditions as that covered by Sir Charles’s right of pre-emption.

We were not wholly disappointed, as it turned out, in the result. A month or two later, while we were still at Seldon, we received a long and encouraging letter from our prospectors on the spot, who had been hunting over the ground in search of gold-reefs.

They reported that they had found a good auriferous vein in a corner of the tract, approachable by adit-levels; but, unfortunately, only a few yards of the lode lay within the limits of Sir Charles’s area. The remainder ran on at once into what was locally known as Craig-Ellachie’s section.

However, our prospectors had been canny, they said; though young Mr. Granton was prospecting at the same time, in the self-same ridge, not very far from them, his miners had failed to discover the auriferous quartz; so our men had held their tongues about it, wisely leaving it for Charles to govern himself accordingly.

“Can you dispute the boundary?” I asked.

“Impossible,” Charles answered. “You see, the limit is a meridian of longitude. There’s no getting over that. Can’t pretend to deny it. No buying over the sun! No bribing the instruments! Besides, we drew the line ourselves. We’ve only one way out of it, Sey. Amalgamate! Amalgamate!”

Charles is a marvellous man! The very voice in which he murmured that blessed word “Amalgamate!” was in itself a poem.

“Capital!” I answered. “Say nothing about it, and join forces with Craig-Ellachie.”

That very same evening came a telegram in cipher from our chief engineer on the territory of the option: “Young Granton has somehow given us the slip and gone home. We suspect he knows all. But we have not divulged the secret to anybody.”

“Seymour,” my brother-in-law said impressively, “there is no time to be lost. I must write this evening to Sir David, I mean to My Lord. Do you happen to know where he is stopping at present?”

“The Morning Post announced two or three days ago that he was at Glen-Ellachie,” I answered.

“Then I’ll ask him to come over and thrash the matter out with me, » my brother-in-law went on. “A very rich reef, they say. I must have my finger in it!”

We adjourned into the study, where Sir Charles drafted, I must admit, a most judicious letter to the rival capitalist. He pointed out that the mineral resources of the country were probably great, but as yet uncertain. That the expense of crushing and milling might be almost prohibitive. That access to fuel was costly, and its conveyance difficult.