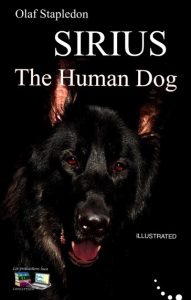 Follow the adventures of this special dog who is able to understand and speak. You will learn how to make a dog like this. You will meet nice peoples that you will love. Follow them.

Here is an extract:
…
The production of these super-sheep-dogs and others which followed formed a camouflage for Thomas’s more exciting venture, of which Sirius was at present the only outcome.

The public would be led to believe that super-sheep-dogs and other animals of missing-link mentality were his whole concern. If the little Alsatian really developed to human mental stature, few people would suspect it. Thomas was always morbidly anxious that it should not be exploited. It must grow up in decent obscurity, and mature as naturally as possible.

The super-sheep-dogs, on the other hand, were allowed to gain notoriety. The farmers who had accepted them mostly with great reluctance soon found that fate had given them pearls of great price. The animals learned their technique surprisingly quickly, and carried out their orders with unfailing precision. Commands had seldom to be repeated.

Sheep were never hustled, and yet never allowed to break away. Not only so, but Trelone’s dogs had an uncanny way of understanding instructions and carrying them out with no human supervision. They attached the right meanings to the names of particular pastures, hillsides, valleys, moors.

Told to “fetch sheep from Cefn” or from Moel Fach or what not, they succeeded in doing so while their master awaited them at home. They could also be sent on errands to neighbouring farms or villages. They would take a basket and a note to a particular shop and bring back the required meat or haberdashery.

All this was very useful to the farmers, and extremely interesting to Trelone, who was of course allowed every chance of studying the animals. He found in them a startlingly high degree of practical inventiveness, and a rudimentary but remarkable understanding of language.

Being after all sub-human, they could not understand speech as we do, but they were incomparably more sensitive than ordinary dogs to familiar words and phrases. “Fetch wood from shed,” “Take basket to butcher and baker,” and all such simple familiar orders could be distinguished and obeyed, as a rule without distraction.

Thomas wrote a monograph on his super-sheep-dogs, and consequently scientists from all over the world used to turn up at Garth to be shown the animals at work. Throughout the district their fame was fully established among farmers, and there were many demands for puppies.