The Men of the Last Frontier 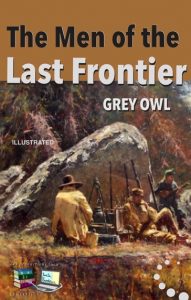 In 1931 Grey Owl published his first book, The Men of the Last Frontier, a work that is part memoir, part history of the vanishing wilderness in Canada, and part compendium of animal and First Nations tales and lore.

A passionate, compelling appeal for the protection and preservation of the natural environment pervades Grey Owl’s words and makes his literary debut still ring with great relevance in the 21st century.

By the 1920s, Canadas outposts of adventure had been thrust farther and farther north to the remote margins of the country. Lumbermen, miners, and trappers invaded the primeval forests, seizing on natures wealth with soulless efficiency.

Grey Owl himself fled before the assault as he witnessed his valleys polluted with sawmills, his hills dug up for hidden treasure, and wildlife, particularly his beloved beavers, exterminated for quick fortunes.

The following winter, in the same district, the two parties met, six men all told; threats were exchanged over the muzzles of loaded rifles, and a pitched battle seemed imminent. But the affair had attracted the attention of the Mounted Police and itching trigger-fingers had to be controlled in this instance.

Arrests were made and a trial staged. Justice, unable to differentiate between the claims of either side, dropped the case; but such things are never forgotten nor forgiven.

This affair was a modification of the old “Longue Traverse,” a scheme adopted by the despotic representatives of a big fur company in earlier days, whereby undesirables, such as freetraders, encroaching trappers and others, were captured, their outfit confiscated, and themselves turned loose with a rifle and a few rounds of ammunition, to find their way on foot, hundreds of miles, to the nearest town.

And often enough a pair of Indian killers, earning thereby, perhaps, a rebate on their debt, followed stealthily behind to watch the dying struggles of a starving man with callous apathy, or grimly stalk him day by day, and later shoot him.

A man who has successfully overcome the difficulties, and endured the privations of the trap-line for a few years, can no more quit it than the confirmed gambler can leave his gaming.

Trapping is, after all, a gamble on a large scale, the trapper’s life and outfit against the strength of the wilderness and its presiding genii, to win a living; and in the hazard he experiences a rare pleasure.

Nor is his life without its compensations. He may climb a mountain, and look as far as the eye can reach, out over illimitable leagues of forested hill and valley stretching into the dim distance, with a feeling of ownership, and there is none to say him nay.

And to all intents and purposes it is his, therein to work his will; surely a vast enough estate to satisfy the most land-hungry, and with no taxes or upkeep attached to it.

His sole title to possession is the hard-won supremacy he has attained to by unremitting toil, as potent for him as any letters patent could be. The sense of untrammelled freedom and a wild independence, inculcated by wanderings over an unlimited area, enter his soul, unfitting him for any other walk of life. His is the sport of kings, and he is free as no king ever was.

In the amphitheatre of the dusky hills, where is silence, unbroken and absolute, a hush that has held sway since time began….

He scans the face of the wilderness, and there gets his inspiration. The pale disc of the moon shining through the interlaced limbs of a leafless tree; the silhouette of tall distant pines against the frosty sky; the long shadows cast by a winter sunset across the white expanse of a snow-bound lake, all strike a chord which finds a ready response in his breast.

He may not be able, or willing, to express his feelings to the world, but they indubitably impress his unspoken thoughts. The sublimity, the immensity, and the silent majesty of his surroundings influence his character, and the trapper is often a quiet thoughtful man, set in his ways, and not overly given to conversation.

Many are the tales told of his taciturnity; exaggerated accounts, no doubt, many of them, but typical. There is the story of the old-timer, who, in years of solitary wandering, had happened on a particularly pleasant camping ground and was preparing to pass the night there.

Presently he saw coming a canoe, and soon a stranger, attracted no doubt by his smoke and the knowledge of the presence of another of his kind in the interminable waste, edged his canoe ashore and landed.

The habit of a lifetime was not to be so easily broken.

The other man commenced to unload his canoe, and whilst he so busied himself, endeavoured to warm the chill atmosphere by cheerful conversation.

Receiving no answer he looked up to see his newly-found companion, deliberately folding his blankets, and pulling down his tent, evidently so lately erected.

“What in hell’s wrong,” he demanded in pained surprise. “Not goin’ away, a’ir you?”

“Yes, I’m going away,” was the answer. “They’s too darn much discussion around here to suit my fancy.”

It is related of a man of my acquaintance that on an occasion being informed politely that it was “a great day” he gave no answer; and on the remark being repeated, replied—”I’m not denying it, am I? I don’t aim to have no argyment with you!”

Men who follow this life will follow no other, and the interests of the outside world, current events, the doings of the great and the near-great, affect them not at all.

All of our ebooks