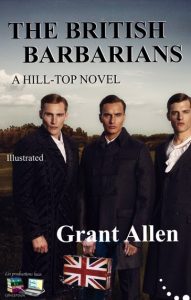 An Alien came in England to find and analyze taboos in this country. He had to take extreme caution necessary in all anthropologue investigations on points of religious or social usage. You will like his points of vue and his reactions in many circumstances. Very special!

As they walked together across the lush green fields, thick with campion and yellow-rattle, they came to a dense copse with a rustic gate, above which a threatening notice-board frowned them straight in the face, bearing the usual selfish and anti-social inscription, “Trespassers will be prosecuted.”

“Let’s go in here and pick orchids,” Bertram suggested, leaning over the gate. “Just see how pretty they are! The scented white butterfly! It loves moist bogland. Now, Mrs. Monteith, wouldn’t a few long sprays of that lovely thing look charming on your dinner-table?”

“But it’s preserved,” Philip interposed with an awestruck face. “You can’t go in there: it’s Sir Lionel Longden’s, and he’s awfully particular.”

“Can’t go in there? Oh, nonsense,” Bertram answered, with a merry laugh, vaulting the gate like a practised athlete. “Mrs. Monteith can get over easily enough, I’m sure. She’s as light as a fawn. May I help you over?”

And he held one hand out.

“But it’s private,” Philip went on, in a somewhat horrified voice; “and the pheasants are sitting.”

“Private? How can it be? There’s nothing sown here. It’s all wild wood. We can’t do any damage. If it was growing crops, of course, one would walk through it not at all, or at least very carefully. But this is pure woodland. Are the pheasants tabooed, then? or why mayn’t we go near them?”

“They’re not tabooed, but they’re preserved,” Philip answered somewhat testily, making a delicate distinction without a difference, after the fashion dear to the official intellect. “This land belongs to Sir Lionel Longden, I tell you, and he chooses to lay it all down in pheasants. He bought it and paid for it, so he has a right, I suppose, to do as he likes with it.”

“That’s the funniest thing of all about these taboos,” Bertram mused, as if half to himself. “The very people whom they injure and inconvenience the most, the people whom they hamper and cramp and debar, don’t seem to object to them, but believe in them and are afraid of them.

In Samoa, I remember, certain fruits and fish and animals and so forth were tabooed to the chiefs, and nobody else ever dared to eat them. They thought it was wrong, and said, if they did, some nameless evil would at once overtake them.

These nameless terrors, these bodiless superstitions, are always the deepest. People fight hardest to preserve their bogeys. They fancy some appalling unknown dissolution would at once result from reasonable action.

I tried one day to persuade a poor devil of a fellow in Samoa who’d caught one of these fish, and who was terribly hungry, that no harm would come to him if he cooked it and ate it. But he was too slavishly frightened to follow my advice. He said it was taboo to the god-descended chiefs.

If a mortal man tasted it, he would die on the spot. So nothing on earth would induce him to try it. Though to be sure, even there, nobody ever went quite so far as to taboo the very soil of earth itself. Everybody might till and hunt where he liked.

It’s only in Europe, where evolution goes furthest, that taboo has reached that last silly pitch of injustice and absurdity. Well, we’re not afraid of the fetich, you and I, Mrs. Monteith. Jump up on the gate. I’ll give you a hand over!”

And he held out one strong arm as he spoke to aid her.

Frida had no such fanatical respect for the bogey of vested interests as her superstitious brother, so she mounted the gate gracefully. She was always graceful.

Bertram took her small hand and jumped her down on the other side, while Philip, not liking to show himself less bold than a woman in this matter, climbed over it after her, though with no small misgivings.

They strolled on into the wood, picking the pretty white orchids by the way as they went, for some little distance. The rich mould underfoot was thick with sweet woodruff and trailing loosestrife.

Every now and again, as they stirred the lithe brambles that encroached upon the path, a pheasant rose from the ground with a loud whir-r-r before them. Philip felt most uneasy.

“You’ll have the keepers after you in a minute,” he said, with a deprecating shrug. “This is just full nesting time. They’re down upon anybody who disturbs the pheasants.”

“But the pheasants can’t BELONG to any one,” Bertram cried, with a greatly amused face. “You may taboo the land. I understand that’s done, but surely you can’t taboo a wild bird that can fly as it likes from one piece of ground away into another.”

Philip enlightened his ignorance by giving him off-hand a brief and profoundly servile account of the English game-laws, interspersed with sundry anecdotes of poachers and poaching. Bertram listened with an interested but gravely disapproving face.

“And do you mean to say,” he asked at last “they send men to prison as criminals for catching or shooting hares and pheasants?”

“Why, certainly,” Philip answered. “It’s an offence against the law, and also a crime against the rights of property.”

“Against the law, yes. But how on earth can it be a crime against the rights of property? Obviously the pheasant’s the property of the man who happens to shoot it. How can it belong to him and also to the fellow who taboos the particular piece of ground it was snared on?”

“It doesn’t belong to the man who shoots it at all,” Philip answered, rather angrily. “It belongs to the man who owns the land, of course, and who chooses to preserve it.”

“Oh, I see,” Bertram replied. “Then you disregard the rights of property altogether, and only consider the privileges of taboo. As a principle, that’s intelligible. One sees it’s consistent.

But how is it that you all allow these chiefs–landlords, don’t you call them? To taboo the soil and prevent you all from even walking over it?

Don’t you see that if you chose to combine in a body and insist upon the recognition of your natural rights, if you determined to make the landlords give up their taboo, and cease from injustice, they’d have to yield to you, and then you could exercise your native right of going where you pleased, and cultivate the land in common for the public benefit, instead of leaving it, as now, to be cultivated anyhow, or turned into waste for the benefit of the tabooers?”

“But it would be WRONG to take it from them,” Philip cried, growing fiery red and half losing his temper, for he really believed it. “It would be sheer confiscation. The land’s their own. They either bought it or inherited it from their fathers. If you were to begin taking it away,what guarantee would you have left for any of the rights of property generally?”