A Case Book of Mme. Storey 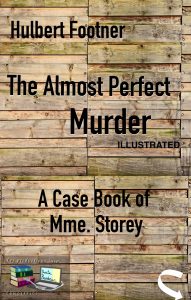 Mme. Storey is perhaps the most celebrated woman detective in fiction. Her detective ability is aided to some extent by feminine intuition, but she achieves results, amazingly successful results, for the problems here elucidated certainly proved baffling enough to the police.
This volume provides thrilling fare for all readers of detective stories, and Mr. Hulbert Footner writes with his customary verve and ingenuity, letting Mme. Storey’s secretary speaks about the events.
Five different stories that you will like.

We four women were shown into a dressing-room on the first floor of the mansion to tidy up after our strenuous escape from Webster Hall. Naturally Mme. Storey and I did not unmask in the presence of the others.

Those two, masked also, would not approach within a yard of each other. Suspicion divided us all. My employer and I lingered in the room until they had gone out, so that we could have a word or two together. What a relief it was to raise our masks!

“Are you scared, Bella?” she asked, smiling.

“You know I am,” I answered tartly. “So there’s not much use in denying it.”

There was a telephone in the room. She took down the receiver and listened. “Dead,” she told me, hanging up again.

“Where do you suppose Crider is?” I asked nervously.

“Heaven knows!” she said. “I couldn’t foresee any such outcome as this, and he has no instructions to cover it. The poor fellow will be wild with anxiety… We may solve our case through this accident,” she went on thoughtfully, “but it’s risky — it’s risky!”

“Oh, what does a jewel robbery matter beside a murder?” I said, shuddering.

“It’s all part of the same thing,” she said gravely.

I stared. “Do you know where we are?” I asked. She shook her head. “I thought I knew most of the great houses in New York, but I’ve never been in this one. There can’t be many of the type left. It’s on Fifth Avenue, I should say, and probably it’s somewhere in the Sixties.

We’ll dope it out before we leave. Ha!” she cried, suddenly pointing to the telephone instrument; “there’s our clue! The telephone number is Buckingham 4-3773.”

“But you can’t go through the telephone book looking for that number!” I objected.

“I won’t have to,” she said, tapping the directory. It had been slipped inside an elaborately tooled leather cover which bore a big V on the front. “Undoubtedly the family initial,” she said.

The Social Register lay beside the telephone book, and Mme. Storey picked up the blue volume as affording a narrower field for her search. Almost immediately she said: “I have it! A. A. Vandegrift. I was nearly right. This house is on Madison instead of Fifth, and behind St. Patrick’s Cathedral. We have often passed it!”

“What does Vandegrift do?” I asked.

“Do?” she said, smiling. “He’s a rich man of the third generation. He sits in a window of the Union Club during the rare periods when he favours New York with his visits and complains that times are not what they were.”

“It’s too bad the Social Register doesn’t give the butlers’ names, too,” I suggested.

“I know it now, without that!” she said. “Crider told me that the president of the Butlers’ Association was the Vandegrifts’ butler. His name is Alfred Denby. That identifies Mr. Punch. We are making headway, my dear.”

“We’d better go out or they’ll be getting suspicious,” I said, nervously.

“Just one moment! Mr. Punch, I take it, is preparing to hold a sort of hearing. I want you to testify against Abdullah.”

“But I don’t know anything against him.”

“Then make something up. You’ll see why later. And don’t mind if I get you all tangled up on cross-examination. I don’t want them to suspect we’re working together.”

We adjusted our masks and left the room.

Mr. Punch had placed a little table for himself under the single light in the middle drawing-room. He sat behind it on a sofa with six chairs in linen covers ranged in a semi-circle before him. It was certainly the most grotesque court ever held — if you could call it a court: Mr. Punch and six mummers. But all the fun had gone out of this mummery. The participants were distracted with grief, fear and suspicion.

He began in his suave and reasonable voice:

“Abdullah — or whatever your name may be — all the evidence seems to point to you as the one who shot George Danforth. But we want to give you every chance. Have you got anything to say for yourself?”

“You knew who Danforth was?” Mr. Punch snapped.

“Sure, I knew,” he said sullenly. “Everybody connected with the Association knew him.”

“Then you’re connected with the Association?”

“That’s no proof,” muttered Abdullah. “Plenty of others had it in for him. He was a blackguard with women.”

Zuleika snatched off her mask, revealing her passionate gipsy face. “That’s a lie!” she cried.

Now that he was dead, I saw that both these women were getting ready to sanctify him. Well, that’s the way women are!

“One minute, ladies,” said Mr. Punch smoothly. Turning to Abdullah, he said: “If you didn’t shoot him, who did?”

“The gun was fired beside me,” said Abdullah. He leaned forward and looked at Zuleika. “I believe she did it!”

She glared around at us as if we were all her enemies. “Yes, I can,” she said. “I’m a good shot with a pistol, and I don’t care who knows it. But if it had been me I would have had to shoot on the level with my eyes. It’s the only way I can shoot.

All of our eBooks