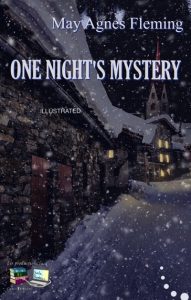 One Night’s Mystery was first serialized in “New York Weekly” and the “London Journal” before being published in book form in 1876, toward the end of Fleming’s life. It is a prime example of the type of work Fleming wrote, romantic suspense with a few Gothic elements thrown in. Her writing style is direct, her characters simple but reasonably well fleshed out, and the complicated relationships between the characters thorny and entertaining, if a tad melodramatic.
Discover this story and these interesting people!

The long, loosely written, a rambling letter dropped on Sydney’s lap, her hands folded over it, and she sat strangely quiet (for her), looking out at the faint opaline twilight sky. To leave school on Monday, to be married in a month! Surely enough to startle any school-girl of seventeen.

Besides being the daughter of the richest man, besides having double, treble the spending money of any other girl in the pensionnat, besides having silks and laces and jewels as though she were five-and-twenty and “out,” besides having beauty and talent and goodness and grace, Sydney Owenson had one other and still greater claim to be “queen rose” of Mlle. Stephanie’s “rosebud garden of girls,”, she was engaged!

All and each of the four-and-thirty other boarders of mam’selle, not to speak of the one-and-twenty day-scholars, looked forward in the fullness of time to a possible lover, a prospective engagement, and an ultimate husband, but a real lover and a bona fide engagement none of them had yet attained, with the exception of Miss Owenson.

That height of bliss Miss Owenson had reached in her sixteenth birthday. The midsummer vacation over, the young lady had returned to Canada from her paternal mansion, a solitaire diamond ablaze on one slim finger, a locket (with a gentleman’s portrait and a ring of brown hair) around her white throat, and calmly announced to all whom it might concern that she was engaged.

The first stunning shock of surprise over, a torrent of questions poured upon the blissful fiancée.

“Oh! good gracious! Oh, Mon Dieu! was she really? Oh, how nice! Oh! c’est charmant? What was his name? Where did he live? How did it come about? What did he say? Was he handsome? Was he rich? Did papa and mamma know? Oh, what a love of a ring, and oh, how splendid it was to be engaged at sixteen! And when, Ô Sydney! when were they going to be married?”

“There! there! there!” cried Miss Owenson shrilly, breaking away from fifty-six eager, excited faces. “I am sorry I told you anything about it! One would think I was the only girl in the world ever engaged before. If you leave me alone I’ll answer all your questions. Stand off, and let me see. ‘His name?’ Well, his name is Albert Vaughan, Bertie Vaughan, a pretty name to begin with.

‘Where does he live?’ He lives at Oxford at present. At least he was on his way back there when I left home. ‘How did it come about?’ Well, it didn’t come about. It was always to be, destined from all time, and that sort of thing.

Ever since I can remember anything, I remember being told I was to marry Bertie someday, if I behaved myself, family arrangements, you see, like a thing in a story. ‘What did he say?’ Oh, well, he just came to me on my birthday, and slipped this ring on my finger, and said, ‘I say, Syd, I want you to marry me this day twelve months, or thereabouts, you know;’ and I said, ‘All right, Bert, I will.’

‘Is he handsome?’ Handsome as an angel, Helen, brown eyes, brown curling hair, fair complexion, rosy cheeks like a girl, small hands and feet, and the sweetest little love of a mustache! ‘Is he rich?’ Poor as a church mouse, Cyrilla, not got a sou in the earthly world. But as I am to have enough for both, that doesn’t signify.

‘Do papa and mamma know?’ Of course they know, goosies! Bertie and I would never have thought of such a thing if papa hadn’t told us to think of it. ‘And when are we to be married?’ Oh, I don’t know, not for ever so long. I don’t want to be married, it’s dreadfully dowdy and stupid. We won’t be married for ages, not until I’m old, oh! ever so old, twenty-one, may be. It’s nice enough to be engaged, but married, bah-h-h!”

Miss Owenson pronounced her “bah!” with the disgusted look of one who swallows a nauseous dose, and sprang to her feet.