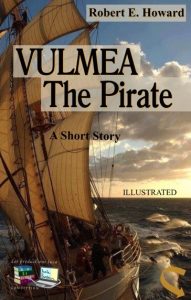 After being captured, the pirate told about a mysterious treasure. The captain of the Majesty’s frigate decided to look for it. Follow their dangerous adventure. You will be astonishing!
Published first as Black Vulmea’s Vengeance.

The Road to Hell

“This is like the road to Hell, John Wentyard. Easy to go down — not so easy to go up again.”

“What are you maundering about?” snarled Wentyard, clapping his hat viciously on his head. “You Irish are all babblers and mooncalves! Get on with — ”

From the jungle beyond the mouth of the ravine came a sharp twang. Something whined venomously down the gulch, ending its flight with a vicious thud.

One of the soldiers gulped and started convulsively. His musket clattered to the earth and he reeled, clawing at his throat from which protruded a long shaft, vibrating like a serpent’s head. Suddenly he pitched to the ground and lay twitching.

“Indians!” yelped Wentyard, and turned furiously on his prisoner. “Dog! Look at that! You said there were no savages hereabouts!”

“Do you call them savages? Bah! Poor-spirited dogs that skulk in the jungle, too fearful to show themselves on the coast. Don’t you see them slinking among the trees? Best give them a volley before they grow too bold.”

Wentyard snarled at him, but the Englishman knew the value of a display of firearms when dealing with natives, and he had a glimpse of brown figures moving among the green foliage.

He barked an order and 14 muskets crashed, and the bullets rattled among the leaves. A few severed fronds drifted down. That was all. But even as the smoke puffed out in a cloud, Vulmea snapped the frayed cords on his wrists, knocked his guard staggering with a buffet under the ear, snatched his cutlass and was gone, running like a cat up the steep wall of the ravine.

The soldiers with their empty muskets gaped helplessly after him, and Wentyard’s pistol banged futilely, an instant too late. From the green fringe above them came a mocking laugh.

“Fools! You stand in the door of Hell!”

“Dog!” yelled Wentyard, beside himself, but with his greed still uppermost in his befuddled mind. “We’ll find the treasure without your help!”

“You can’t find something that doesn’t exist,” retorted the unseen pirate. “There never were any jewels. It was a lie to draw you into a trap. Dick Harston never came here. I came here, and the Indians butchered all my crew in that ravine, as those skulls in the grass there testify.”

“Liar!” was all Wentyard could find tongue for. “Lying dog! You told me there were no Indians hereabouts!”

“I told you the head-hunters never came over the mountains,” retorted Vulmea. “They don’t either. I told you the people who built the city were all dead. That’s so, too.

I didn’t tell you that a tribe of brown devils live in the jungle near here. They never go down to the coast, and they don’t like to have white men come into the jungle.

I think they were the people who wiped out the race that built the city, long ago. Anyway, they wiped out my men, and the only reason I got away was because I’d lived with the red men of North America and learned their wood’s craft. You’re in a trap you won’t get out of, Wentyard!”

“Climb that wall and take him!” ordered Wentyard, and half a dozen men slung their muskets on their backs and began clumsily to essay the rugged ramp up which the pirate had run with such catlike ease.

“Better trim sail and stand by to repel boarders,” Vulmea advised him from above. “There are hundreds of red devils out there — and no tame dogs to run at the crack of a caliver, either.”

“It goes against my principles,” the Irishman admitted, “but it was my only chance for life. I’m sorry for your men. That’s why I advised you to bring only a handful. I wanted to spare as many as possible.

There are enough Indians out there in the jungle to eat your whole ship’s company. As for you, you filthy dog, what you did in Ireland forfeited any consideration you might expect as a white man. I gambled on my neck and took my chances with all of you. It might have been me that arrow hit.”

The voice ceased abruptly, and just as Wentyard was wondering if there were no Indians on the wall above them, the foliage was violently agitated, there sounded a wild yell, and down came a naked brown body, all asprawl, limbs revolving in the air.

It crashed on the floor of the ravine and lay motionless — the figure of a brawny warrior, naked but for a loin-cloth of bark. The dead man was deep-chested, broad-shouldered and muscular, with features not unintelligent, but hard and brutal. He had been slashed across the neck.

The bushes waved briefly, and then again, further along the rim, which Wentyard believed marked the flight of the Irishman along the ravine wall, pursued by the companions of the dead warrior, who must have stolen up on Vulmea while the pirate was shouting his taunts.

The chase was made in deadly silence, but down in the ravine conditions were anything but silent. At the sight of the falling body a blood-curdling ululation burst forth from the jungle outside the mouth of the ravine, and a storm of arrows came whistling down it.

Another man fell, and three more were wounded, and Wentyard called down the men who were laboriously struggling up the vine-matted ramp. He fell back down the ravine, almost to the bend where the ancient gate-posts jutted, and beyond that point, he feared to go.

He felt sure that the ravine beyond the Gateway was filled with lurking savages. They would not have hemmed him in on all sides and then left open an avenue of escape.

At the spot where he halted, there was a cluster of broken rocks that looked as though as they might once have formed the walls of a building of some sort. Among them, Wentyard made his stand.

He ordered his men to lie prone, their musket barrels resting on the rocks. One man, he detailed to watch for savages creeping up the ravine from behind them, the others watched the green wall visible beyond the path that ran into the mouth of the ravine. Fear chilled Wentyard’s heart.

The sun was already lost behind the trees and the shadows were lengthening. In the brief dusk of the tropic twilight, how could a white man’s eye pick out a swift, flitting brown body, or a musket ball find its mark? And when darkness fell — Wentyard shivered despite the heat.

Arrows kept singing down the ravine, but they fell short or splintered on the rocks. But now bowmen hidden on the walls drove down their shafts, and from their vantage point, the stones afforded little protection.

The screams of men skewered to the ground rose harrowingly. Wentyard saw his command melting away under his eyes. The only thing that kept them from being instantly exterminated was the steady fire he had them keep up at the foliage on the cliffs.

They seldom saw their foes. They only saw the fronds shake, had an occasional glimpse of a brown arm. But the heavy balls, ripping through the broad leaves, made the hidden archers wary, and the shafts came at intervals instead of in volleys. Once a piercing death yell announced that a blind ball had gone home, and the English raised a croaking cheer.

Perhaps it was this which brought the infuriated warriors out of the jungle. Perhaps, like the white men, they disliked fighting in the dark, and wanted to conclude the slaughter before night fell. Perhaps they were ashamed longer to lurk hidden from a handful of men.

At any rate, they came out of the jungle beyond the trail suddenly, and by the scores, not scrawny primitives, but brawny, hard-muscled warriors, confident of their strength and physically a match for even the sinewy Englishmen.

They came in a wave of brown bodies that suddenly flooded the ravine, and others leaped down the walls, swinging from the lianas. They were hundreds against the handful of Englishmen left.

These rose from the rocks without orders, meeting death with the bulldog stubbornness of their breed. They fired a volley full into the tide of snarling faces that surged upon them, and then drew hangers and clubbed empty muskets.