The Actress’s Daughter by M.A. Fleming 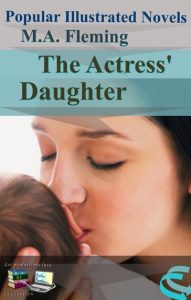 A young girl with bad-tempered has many adventures in her life. From school to marriage to honour, etc. Follow her in her special life with ups and downs, you will like it!

Two weeks passed. Charley was quite well again, and had left no effort untried to reinstate himself in the good graces of Georgia.

As that young gentleman, in the profundity of his humility, had once told her he seldom failed in anything he undertook, and with his seeming genial good humor and handsome boyish face, he never found it a difficult task to make people like him, and Georgia was no more able to resist his influence than the rest of the world. And so they became good friends again — “brothers in arms” Charley said.

At first Georgia tried to resist his advances, and felt indignant at herself for allowing him to talk her into good humor and make her laugh. But it was all of no use, and at last the struggle was given up, and she condescended to patronize Master Wildair with a grave superiority that disturbed the good youth’s gravity most seriously at times.

Richmond had not lost his interest in the unique child, and his influence over her increased every day. But still he was the only one who had any command over her; to the rest of the world she was the same hot, peppery, fiery little snap-dragon, defying all wills and commands that clashed with her own.

And even his wishes, when very repugnant to her, she openly and fiercely braved. But, as a general thing, she began to be anxious to please her young judge, whose grave glance of stern disapproval could trouble her fearless little heart as that of no other in the world ever could.

And, though she was too proud to openly let him see she cared for his approval or disapproval, still he did see it, and exulted therein.

Georgia had made her new friends acquainted with the pretty little Emily Murray, whom Charley unhesitatingly pronounced at first sight a “regular stunner,” and these four soon became inseparable friends.

At first, Emily was shy and silent, which Charley perceiving, he also assumed a look of extreme timidity, not to say distressing bashfulness, which so imposed upon simple little Emily, that, pitying his evident embarrassment, she would timidly try to help him out by opening a conversation.

“Is it nice to live in New York?” Emily would say, hesitatingly.

“Yes’m,” would be Charley’s reply, in a tone of painful timidity.

“Won’t your ma miss you a good deal?” Emily would insinuate, getting courage.

This long word being a puzzle to Emily she would have to stop a moment to reflect on its probable meaning before going on.

“So is your brother.”

Again there would be a pause, during which Emily would look deeply shocked by this display of vanity — and then:

“It ain’t nice to praise one’s self,” Emily would observe, seriously.

“Well, but it’s true,” Charley would begin, in an argumentative tone. “Now I ask yourself — don’t you think I’m nicer than he is?”

Now, it was Miss Emily’s private conviction that he decidedly was, she could not say no, and not wishing to commit herself by saying yes, she would look grave, and remain silent. But Charley, whose shyness generally passed away at this point, was not to be put off, and would insist:

“Now, Emily, just tell the truth, as every well-brought-up little girl should, and say, don’t you like me twice as well as you do Rich?”

“Well, ye-es,” Emily would reply, hesitatingly, “but I guess he knows more than you do; he looks awfully wise, anyway, and then Georgia minds him, and she doesn’t mind you.”

“That’s because she isn’t capable of appreciating solid wit and hidden genius — or, to use language more fitted for your uncultivated intellect, my young friend — she doesn’t know on which side the bread’s buttered. Any person with his senses about him would see at a glance I am worth a dozen of Richmond.”

“No, you’re not,” would be Emily’s decided answer; “you only think so yourself. I heard Uncle Edward saying your brother was wise for his age, and knew more than any young man he ever met, and he only laughed about you, and said you were a ‘curled darling of nature,’ whatever that means. So, then, I guess Uncle Edward knows better than you.”

“Now, Miss Emily, I can’t stand this. I positively can’t you know. It’s outrageous to expect me to lie up here and be abused in this shameful fashion, and told anybody’s Uncle Edward knows more about me than I do myself.

I’ve an immense respect for Father Murray, but still I won’t permit him or anybody else to insinuate that they know more about Mr. Charles Wildair than I do. I’ve been acquainted with that promising youth ever since he was the size of a well-grown doughnut, and I am prepared to say, without mental reservation of any kind, that he is a perfect encyclopedia of all sorts of learning — a moving, living Webster’s Dictionary, neatly bound in cloth.

I’ve undergone grammar, declined verbs and other vicious parts of speech. I have suffered a severe course of geography, and can tell to an iota where Ireland, Kamtschatka, and lots of other aggravating places are situated.

I have fought my way through French, and German, and Latin, and other dead languages. And when I go back to New York, I’m bound to have at them again, and have every single one of them, dead or alive, at my fingers ends.

I have a taste for poetry and the fine arts, as I evinced in early life by a diligent perusal of that work of thrilling interest known as ‘Mother Goose’s Melodies’, and by becoming a proficient on the Jew’s-harp. I have a soul above the common, Miss Nancy, and can discover beauties in a tallow candle, and sublimity in a mug of milk and water.

And now, if after this brief and inadequate exposition you don’t acknowledge that my thing-um-bob-sentiments do me honor, then your intellect, like small beer in thunder, is something to be looked upon with pity and contempt!”

As Mr. Wildair, Jr., usually promulgated his sentiments to an admiring world in an exceedingly slow and leisurely manner, it took him some time to get to the end of this speech, and when he was done he found that Emily, overcome by the heat and his monotonous tone, was dropping asleep.

Making a grimace, he was about to lounge back into his former lazy position, when Georgia, who had left them a moment before in full chase after a butterfly, accompanied by Richmond, returned, looking so woebegone and disconsolate that Charley, after a stare of surprise, felt called upon by the claims of common humanity to offer her consolation.