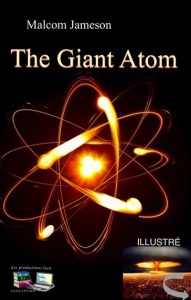 Only Steve Bennion, inventive genius, and his lovely assistant, Kitty, stand between the earth and destruction when a flaming monster threatens to devour and destroy civilization!

Several cars and trucks were parked before the plant gate, and that stood wide open. Most of the vehicles displayed the arrogant trademark of General Atomics, but two of them were police cars. Several policemen were guarding the gate, and, overalled strange workmen swarmed in and out of the building.

Bennion brought his car to a screaming stop and leaped out. He strode over to the nearest policeman.

“What is going on here?” he demanded.

The cop shrugged, but pointed to a typewritten notice wired to the fence. Bennion gave it only a glance, for its heading told him what it meant. The document was entitled, “Notice of Execution Of Foreclosure and Dispossess.”

Bennion stormed past the grinning guards and into his own front yard. Four men on ladders were affixing a sign over the door of the laboratory. The sign said, GENERAL ATOMIC CORPORATION — BRANCH PLANT 571-A.

Coming out the door was Mr. Price, the assistant cashier of the bank. Price tried to avoid Bennion’s angry glance, but could not, so instead he sheepishly tried to explain.

“You mustn’t blame us for this, Mr. Bennion,” he whined, “We had no choice. After your last renewal the bank examiner ordered us to get rid of your note. So we sold it to one of the big city banks. General Atomics must have bought it from them. I swear…”

“Save your breath,” interrupted Bennion bitterly, “though you might have told me sooner.”

“It would only have worried you,” said the other. “We knew you didn’t have any money and couldn’t do anything about it, anyway…”

Bennion planted a hand against the man’s chest and shoved him out of his way. He was licked and he knew it, but that did not compel him to be polite to liars and hypocrites. Then he was face to face with his real adversary.

Farquhar, massive and overbearing, was the next to step out the door.

“Ah, Bennion,” he declared with an oily smile, “I’ve been expecting you. Although your mortgage was a blanket one, covering as it did land, buildings, equipment, and furnishings, we do not want to make things hard for you.

I’ll give you a few minutes to gather up any strictly personal belongings you and your most delightful secretary may have left behind.”

Bennion stopped dead in his tracks and looked the man over with boiling scorn. He never wanted worse to sock a man, but he restrained himself. Farquhar was perhaps fishing for it, and he had witnesses and cops around him by the dozen. So Bennion took firm hold of himself.

“I’ll be out of here in five minutes,” he said. “But get this, Farquhar. You haven’t seen the last of me.”

“Why, of course not, my dear boy,” exclaimed Farquhar. “Naturally you are excited how, and a little disgruntled. But I do expect to see you again.

After you have cooled off we want you to know General’s latchstring is always out. You can keep on running this laboratory if you like and without the pain of worrying about expenses. We take care of those and pay you a good salary, too.”

Bennion did not bother to answer that. Followed by the girl, he just walked by the man. Inside the office, they were treated to a still more disgusting revelation of General Atomic’s methods.

A photostat machine had been set up and a gang of operators were busily photographing the pages of Bennion’s diaries and notebooks. Not that it made any real difference, for Bennion had long known of their practice and was prepared for it.

His file cases — even the locked ones marked “Special and Confidential” — had been carefully stuffed with harmless and meaningless records of the routine laboratory. His real records he kept in his head, or else in the four or five compact notebooks that he and Kitty never failed to keep on their persons.

And even those were in a cryptic code of their own devising, and the key to that they carried in their heads. The only item of real value still in the laboratory was the roll of blueprints covering the construction of the Katherine.

It took Bennion only a moment to dig that out and have it firmly in his hand. It had been left on a table in a workroom in full sight all the time. But no one had molested it, for the outside was plainly marked, “Plan for New Heater Unit to be Installed in Watchman’s shack at the Gate.”

Farquhar’s spies were hunting for bigger game. Meanwhile, Kitty had packed a brief case with a few things from her own desk. After a brief word to their former employees, there was nothing to do but go.

“Where to?” asked Kitty, taking the wheel. She had refused to let Bennion drive, knowing his furious mood. She did not relish road travel at a hundred and more miles an hour.

“To Northburg. I’m taking you home to your father. There are also some matters I want to talk over with him.”

It was late at night when the car rolled through the tree-shaded streets of Northburg, the sleepy town that was the home of Northburg Tech. It drew up before the rambling brick house where Dr. Pennell lived.