The Under Dogs With Mme. Storey 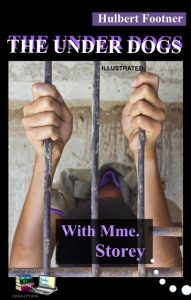 In this mystery novel, the author tells of the amazing detective skill of Rosika Storey alias Jessie Seipp, in the opinion of the New York police, the cleverest woman in the world.

He tells how she wove the net which was to snare the greatest crook organisation in America. She faced infinite peril and hardship, and the greatest demands were made upon her courage and her brains.

You will be captivated all through the book. She is a fascinating character, and the book reveals a vast knowledge of New York’s underworld.

Nothing was omitted to create the illusion of Mme. Storey’s departure for her usual three months in Paris. A brilliant group of her friends saw her off at the pier, including the Hon. Emmet Fogarty, Mrs. Cornelius Marquardt, Countess Montpellier, and others much in the public eye.

All of which was commented on in the press. Mme. Storey herself gave out an interview, telling of her plans in detail, and she was photographed at least a dozen times on the sun deck of the Baratoria, for the rotogravure supplements.

A week later, her arrival in Paris was cabled back, and at intervals of two or three days thereafter, items appeared chronicling her appearance at Longchamps, at the Duchesse D’Uze’s garden party, at a reception in the Elysée Palace, and so on. Even her costumes were described. All this was arranged for through an agent in Paris. For, of course, Mme. Storey never left New York.

With her departure, all activities at the office abruptly ceased, and my duties became merely perfunctory. I occupied myself chiefly with reading the newspapers and writing my stories. The newspapers never yielded a word that could be applied to our case.

During the first few days, I believe that I was followed wherever I went, but I was not sure because Mme. Storey had warned me not to betray the least suspicion that I might be followed. At any rate, I had seen one or two men who seemed to ignore my existence rather self-consciously.

One, a heavy, blond German with a pock-marked face and a lowering look, I had seen twice. But, after four days, nothing more of the sort had come under my notice, and I was beginning to hope that our efforts to convince the gang we had no interest in their doings had finally been successful.

On the fifth day Mme. Storey called me up. At the sound of the well-known, slow voice, with a little crinkle of amusement in it, a great gladness filled my breast. We conducted our conversation prudently, since there was a chance that we might be overheard, though it was a slight one. Mme. Storey’s name was so much on all lips that the sound of it might have arrested the attention of even the busiest telephone operator.

“Hello yourself,” I answered. “Are you all right?”

“Right as a trivet! What I want first is news; of course, I’ve read the papers.”

“There is no news, except what has been in the papers. Our friend has made no progress.”

“Well, if nobody has been found, that is something. Have they been interesting themselves in your movements?”

“I think so. You told me not to notice anything of the sort. Since yesterday, I think they’ve been called off.”

“You’d better make sure of that now. Walk once or twice through one of the long, empty blocks in your neighbourhood, and look behind you. Seat yourself for a while on a bench in the Park, from where you can see in every direction.”

“I will. Have you made your plans?”

“Yes, but we’d better not go into details over the phone, I’m still looking for just the job I want. I must establish a background. I mean to be a laundry worker.”

“A laundry worker! in July!” I exclaimed, thinking of her beautiful hands.

“But why a laundry?”

“The work is so hard, and the pay so poor, you can always get a job without any to do about references.”

“I can’t imagine you in a laundry,” I said helplessly.

“I am much changed, my friend.”

“Any instructions?” I asked.

“Yes. I want you to send a telegram to my well-known friend in Tuxedo. Do you get me?”

“Yes. I couldn’t send it in my present make-up without exciting remark in the telegraph office. But you can. Send it from an office where you are known. Just say: ‘Four o’clock, Saturday. If not convenient, name your own time.’ And sign it: ‘Louisa.'”

I repeated this over the wire.

“That’s all now. I’ll call you up at your boarding-house tonight.”

I sent the telegram. And in two hours I got this answer, “I’ll be there: Emily.”

At home that night, I was just finishing dinner when I was summoned to the phone. The instrument is in the hall, just outside the dining-room door. And as all the boarders pricked up their ears, it behooved me to be more careful than ever about my end of the conversation. The voice that came over the wire was strange to me. A slightly husky voice, speaking the clipped, derisive jargon of the streets.

“Hello, guyl! Say, listen. T’ere’s a band concert over in Tompkins Square t’night. Kalsomine yer neck and c’m on over.”

I suppose I gasped audibly. A delighted laugh came winging over the wire, and I heard my mistress’s natural voice.